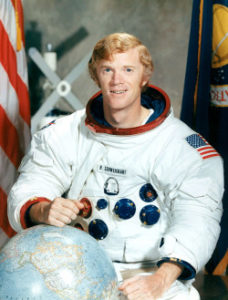 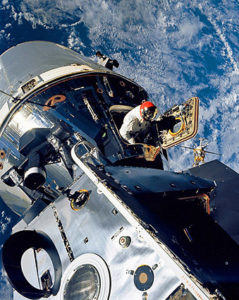 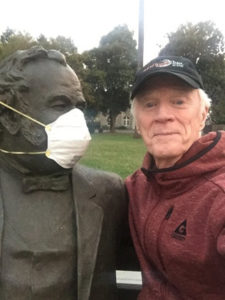 The Sonoma Valley Volunteer Firefighter’s Association is proud to announce Russell L. (Rusty) Schweickart as the Grand Marshall for the 2019 “Rocket Out Of This World” Fourth of July Parade.

This year’s Fourth of July parade carries the theme “Rocket Out Of This World“,  Valley of the Moon celebrating fifty years since Apollo 11 landed on the moon.

Rusty Schweickart a resident of Sonoma and one of three Apollo 9 astronauts responsible for helping America take the critically important next steps just months before Apollo 11’s epic Moon landing.

Schweickart joined NASA as one of 14 astronauts named in October 1963, the third group of astronauts selected. He served as lunar module pilot for Apollo 9, March 3-13, 1969, logging 241 hours in space. This was the third manned flight of the Apollo series and the first manned flight of the lunar module. During a 46 minute EVA Schweickart tested the portable life support backpack which was subsequently used on the lunar surface explorations.

Apollo 9 astronaut Russell L. (Rusty) Schweickart is a retired business and government executive. He co-founded the B612 Foundation, a non-profit private foundation that champions the development of spaceflight capability to protect Earth from future asteroid impacts.

In 2014 Schweickart co-founded Asteroid Day, a day celebrated on June 30 each year dedicated to public education on the impact threat and other features of asteroids.

In 1977, following his NASA career, Schweickart joined the staff of Governor Jerry Brown of California, and served in the Governor's office for two years as his assistant for science and technology. In 1979 Schweickart was appointed to the post of Commissioner of Energy for the State of California and served on the Commission for five and a half years.

In 1987-88, Schweickart chaired the United States Antarctic Program Safety Review Panel for the Director of the National Science Foundation (NSF) in Washington, DC.  At the request of the National Science Foundation, Schweickart also served on the 1997-1998 United States Antarctic Program Outside Review Panel, which reported to the White House and Congress on the future of US facilities in Antarctica.

Schweickart received his Bachelor of Science and Master of Science degrees from the Massachusetts Institute of Technology. He and his wife Nancy Ramsey live in Sonoma, CA. He has seven children, eleven grandchildren, and three great-grandchildren.

The Sonoma Valley Volunteer Firefighter’s Association is excited to have Mr. Schweickart as this year’s Grand Marshal. We are proud to commemorate our Nation’s moon landing with a resident of Sonoma who played such an important part in this event.

For more on Rusty, check him out on Wikipedia